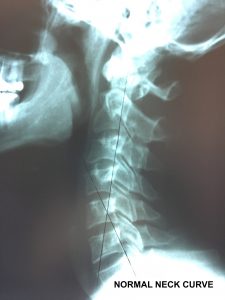 Permanent injury is common for many people who suffer a whiplash type injury!  Typically, they are told it is only soft tissue and they cannot have a permanent injury. Unfortunately, this is far from the truth!

It is common for the insurance adjusters to belittle soft tissue injuries as having insignificant consequences. Yet the research is clear, that soft tissue injury, especially to the supporting ligaments of the spine is serious and can lead to long term pain cycles.

In a study published in the Emergency Radiology, flexion/extension MRI (bending the head forward and backwards) was performed evaluating the neck curve and normal vertebral motion.

The neck curves (cervical spines) of 100 uninjured normal, pain free, adults were compared to 100 adult accident victims following rear-end, low-impact motor vehicle accidents. The injured subjects were examined during the subacute period, at 12 to 14 weeks after injury, at a time when the muscle spasms were gone.

Significant findings were noted in this study, including: a significant presence of loss of the cervical curve and abnormal motion of the spinal vertebra. 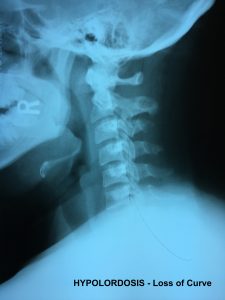 Abnormal Motion Of The Vertebra

The results of this study gives us three important facts:

First, the loss of the normal neck curve is not due to the muscle spasm and cannot be expected to return to normal once the spasms are gone.

Second, the loss of the normal neck curve is a good indicator there will be abnormal, limited motion of the neck vertebra. Motion x-rays of the neck should be taken to evaluate the motion.

Third, the loss of the normal neck curve is a significant indicator of permanent injury to the ligaments of the neck.

If you have been injured in an accident and you have been told the following, you should call our office for a thorough examination.

1. It’s only a soft tissue injury, there is nothing permanent
2. Your doctor did not x-ray your neck OR did not take motion x-rays
3. Your are told the “straight neck” is due to the muscle spasms

These comments indicate you could have suffered a permanent injury it is not being treated as serious as it should be! Call our office at (314) 731-4383 or CLICK TO CALL NOW!

As a 1984 graduate of Life Chiropractic College, Dr. Martin Schmaltz has years of helping those who have been injured in auto accidents. He has extensive training and study in how the injury happens as well as the specific treatments and documentation to help his patients. He is a Certified Chiropractic Insurance Consultant and is called upon to review auto injury cases. He also has a great working relationship with many attorneys in the St Louis area and is know for his detailed notes and diagnosis of the injured patient.