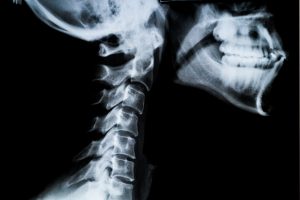 The normal neck curve of the spine is a backwards C-shape called cervical lordosis. This neck curve is the first curve to develop in our spines as babies begin to hold their heads up. As it develops, it increases weight on the individual discs and can be a major site of disc herniation.

It has been recognized that in the past years, younger people are finding that their lifestyles have become more sedentary. Students and office workers find themselves spending longer hours sitting at desks in front of a computer, this results in an increased rate of neck curve abnormalities, or loss of cervical lordosis.

Studies performed in China looked at teenagers with complaints of neck pain and discovered a significantly high rate of abnormal neck curves. In the ages of 6 to 15 years of age the rate was 61%; ages 16 to 25 the rate was 71% and ages 26 – 35 years revealed 76% abnormalities.  In another study, patients with disc degeneration in their neck, it was found that almost 58% had a loss of the normal curve in the neck.

In a review of literature, it was found that there was a connection between the greater loss of a normal neck curve (loss of cervical lordosis) and the increased degree of disc herniation. Further it demonstrated that there is an increase likelihood of spinal cord compression with a loss of normal neck curve. What is exceptionally significant about this study is that it involves younger patients, under the age of 40.

These results strongly indicate that restoring the cervical curvature is vital for improving cervical disc.

In addition to sitting at a computer all day, a loss cervical curve can happen with too much usage of a smartphone: i.e. texting or watching video. Auto accidents are another common way individual can lose their neck curve. The force of the impact rapidly stretches the muscles and ligaments allowing the neck to lose its normal curve.

One of the best treatments you can do for a loss normal cervical lordosis and disc herniation is regular chiropractic care. Our office has years of experience treating individuals with neck pain, loss of neck curve and herniated discs. Call today (314) 731-4383 or CLICK TO CALL NOW