Herniated Low Back Disc: what works and what doesn’t 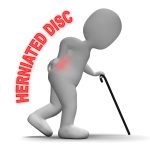 A herniated low back disc is one of the common causes of low back pain. They are more common in those who are 30 to 50 years of age, and twice as common in men verses women. The pain can be localized to the low back or it can also cause leg pain or numbness and tingling.

the fluid filled jelly type material in the center of the disc. When healthy, the disc acts as a cushion and ball bearing function, allowing the vertebra to pivot and freely move. (see figure 1)

The herniated low back disc happens when the jelly center begins to squeeze through cracks in the outer layers of the annulus. The herniated material can be small to quite large. In some cases, it may break away from the disc and move up or down the spinal canal. (see fig 2) 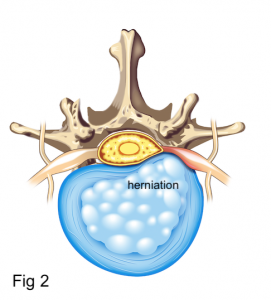 other studies to determine what forms of treatment for herniated low back disc was effective.

The study found there was little evidence to suggest that drug treatment was effective for a herniated disc. This included NSAIDS (nonsteroidal anti-inflammatory drugs) such as ibuprofen, analgesics, and muscle relaxers. Additionally, they found insufficient evidence that steroid injections would work.

Regarding non-drug treatments, they also found that bed rest or traction was effective. There was insufficient evidence to determine the effectiveness of acupuncture, massage, exercise, heat or ice.

What the study did find is that spinal manipulation was effective in relieving the back or leg pain associated with a herniated disc.

Another study published in Journal of Manipulative and Physiological Therapeutics found that chiropractic adjustments were quite effective in relieving low back and leg pain from a herniated disc. This study demonstrated at 3 months post treatment, 90.5% of the patients were improved and 88% were improved at 1 year.

What Will You Do?

Since graduating in 1984 from Life Chiropractic College, Dr. Schmaltz has years of experience helping hurting people get their life back! He has helped people with a herniated disc using unique combination of adjustments to relieve the pain and pressure.

Dr. Schmaltz is in network with UHC, Blue Cross, Anthem, Aetna, Healthlink, and Cigna. Insurance questions? Call and ask for Ava: we can verify your coverage so you can anticipate your copay.