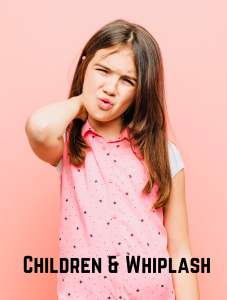 There is a common belief among many, especially insurance adjusters, that children cannot suffer a whiplash injury. Unfortunately, this is far from the case.

One study of 3 English urban emergency departments over an 8-month period identified 105 children between the ages of 4-16 were involved in car crashes. Forty-nine or 47% experienced symptoms of Whiplash Associated Disorder. (1) Their classification was based on the Quebec Task Force Criteria for whiplash disorder.

One of the significant factors that can contribute to children suffering whiplash is their physical difference from adults. Basically, the younger the child, the greater the head size is in relationship to the neck and its muscular strength. This difference prevents the neck muscles from stabilizing the head on impact, allowing a greater “whipping” motion. This difference also localizes the force to the neck different from adults: many children suffer injuries to the upper neck area. By the approximate age of 12, we see a more similar head/neck proportion and greater muscle strength of the neck. At this age, a child’s injury is like an adult. 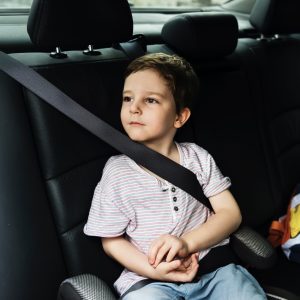 Another factor that can also contribute to a child’s injury are improperly placed seat-belts. As a child transitions from a car seat to a booster, or no booster, there can be difficulties with the shoulder belt riding too high on the lower neck. When an impact happens and the shoulder belt locks, it creates a focal point the neck and head will bend and rotate over, injuring the lower neck area.

It goes without saying, the older the child, the better able they are to communicate their symptoms. Some of the more common symptoms a child may complain of include:

In younger children who cannot communicate well look for such things as: increased irritableness, excessive crying, hiding their face under a blanket (do light sensitivity), stiffness in movement of the neck and head and not as active as they normally are.

The great news, just like adults, is that gentle chiropractic care can help children recover from a whiplash injury. Typically, there is also a much quicker recovery also. If you have any questions, give our office a call at (314) 731-4383.