“But There Was No Damage To My Car!” 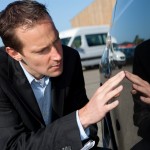 You are stopped for a traffic light when without warning; you are rear-ended. The impact was not hard and there is minimal or no damage to either car because of the energy absorbing bumpers. Never the less, you begin experiencing a headache, neck, shoulder and back pain. The next day, the pains have worsened and you consult your doctor and you are diagnosed as having a whiplash. You wonder how this could happen with such a small impact.

What is the syndrome called “whiplash?” Whiplash is the phenomenon that occurs when a rear-end collision forces the neck and head of the occupants to whip back, stretching the neck’s ligaments and muscles beyond their normal range of movement. Then, due to both protective reflexes of the neck muscles and the springs in the car seats, the head is catapulted forward at an accelerated rate, potentially damaging the muscles and ligaments of the back of the neck.

Although the person experiencing this situation does not have overt signs of injury, the possible damage to the overstretched ligaments of the neck has been well documented. This may be permanent, causing chronic pain and limitation in neck movement, the full extent of which may not be apparent until anywhere from a day to a month after the accident. Unfortunately, the effects of whiplash are often downplayed, and its sufferer thought to be faking, because there was little or no car damage.

However, many people actually suffer a major injury with little (if any), damage to the car. This is often because the energy was shifted from the car, to the occupant, making the injuries worse. Testing has shown that the force striking the car was amplified about two and a half times when it reached the heads of the occupants.

Whiplash injuries often follow a predictable pattern of pain. Some people report pain at the time of the collision, however, many state that the pain began days later. The two reasons for this delay in symptoms would be because the body can release a great deal of endorphins (super strong pain killers) when it is traumatized. These endorphins usually start to wear off around the time that the swelling from the tissue damage starts (24 to 72 hours after impact.) The second reason would be that it takes time for altered mechanics and minimal soft tissue damage to result in pain. Either way, once the swelling starts to be felt and normal activities are continued, more pressure and stretching is placed on the weakened and torn soft tissues causing even more damage and swelling. Ice is very beneficial at this time.

Never let anyone tell you that you cannot be hurt if there is no damage to the car. If you are experiencing pain after an auto collision, contact our office at (314) 731-4383 about the proper examination for auto injuries. You will be glad you did.