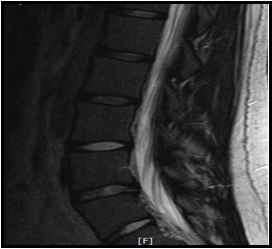 Correlating a single causative event to objectified bodily injury is one of the most important aspects of handling complex medical legal cases.  There are many types of tests that can be used to assess patient’s injury but without causal correlation they have little value.  The mechanism of injury, the patient’s history and the physical examination give clues as to the location and type of injury sustained.  It is only then that the findings on MRI, for example, carry “causative weight.”  In recent years, identification of a “high intensity zone,” or HIZ, on MRI has been identified as a means to visualize tearing of the rear portion of the annulus fibrosis.  In a study by Saifuddin, Braithwaite, White, Taylor and Renton (1998) and in a more recent paper by Peng, Hou, Wu, Zhang and Yang (2006), the authors discuss the reliability of visualizing a high intensity zone on MRI.

Diagnostic criteria to visualize annular tearing on MRI were initially established by Aprill and Bogduk in 1992.

In the 1998 study, the authors state that the objective of the study was to “To determine the sensitivity of magnetic resonance imaging in the detection of painful anular tears manifested by the high-intensity zone” (Saifuddin, Braithwaite, White, Taylor, & Renton, 1998, p. 453).  They continued by saying, “Anular tears were identified in magnetic resonance images by the presence of a high-intensity zone in the posterior annulus” (Saifuddin et al., 1998, p. 453).  The study also pointed out a very important aspect of MRI physics and slice thickness reporting, “The ability to identify an HIZ on T2-weighted MRI scans has also been related to slice thickness. Most current MRI sequences employ a 4- or 5-mm slice thickness. A small tear may therefore not be identified using such slice thicknesses because of partial volume averaging with the surrounding hypointense annulus” (Saifuddin et al., 1998, p. 457).  The authors also recommend that the parameters of the study should not include a gap between slices. It should be noted that the slice thickness parameters, as published by the American College of Radiology in 2006, were outlined in chart form in Bimonthly #74, MRI parameters.

In the study published more recently in 2006, the authors also reported, “The current study suggests that the HIZ of the lumbar disc on MRI in the patient with low back pain could be considered as a reliable marker of painful outer annular disruption” (Peng, Hou, Wu, Zhang, & Yang, 2006, p. 583).  This again confirms the findings of Aprill and Bogduk in 1992.  Proper history taking, documentation of causal relationship and knowledge of how to order and properly read MRI studies is critical in the medical legal world.  Clinicians that have the credentials and are current with the research literature are required to properly render causality, a proper diagnosis and prognosis in personal injury cases.