How Minimal Damage In An Accident Cause An Injury? 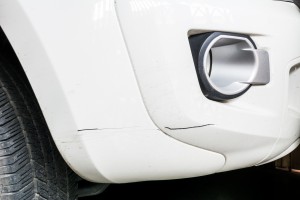 Many insurance companies have an arbitrary dollar amount, such as $1,000, of property damage before they will take an injury claim serious. Their belief is that if there is minimal damage, the victim cannot have been hurt. However, there are basic principles of physics involved in the manufacturing of cars that can increase the likelihood of injury, even with minimal car damage.

A principle of physics called the Law Of Conservation of Energy tells us that “Energy can neither be created nor destroyed; rather, it transforms from one form to another.”  This law is probably the main reason you can suffer an injury in a low speed impact.

In a typical rear end collision, one vehicle is carrying the energy. When it strikes the second car, the energy must be transferred in one of two ways. It either transfers the force to various parts of the car called crumple zones causing damage or the energy is transferred through the car to the weakest point – that being the occupant.

Most newer cars today are manufactured with built in “crumple zones.” The “Crumple zones are designed to absorb the energy from the impact during a traffic collision by controlled deformation.” (1)  Basically, as the car deforms, it transfers the force of the impact away from the occupants. This explains why those who are involved in a collision with moderate damage to the car can walk away with relatively minor injuries.

A classic example of this crumple zone transfer of force is seen in a NASCAR collision. We have all been amazed to see one of these race cars traveling at 170 mph collide: pieces of the car fly off and the driver walks away! It is because of this Law Of Conservation of Energy; every piece that flies off the car is transferring energy away from the driver.

On the other hand, the car bumpers are designed to withstand impacts of 5-7 mph before they crumple. Based on the laws of physics, this force of impact must be transferred elsewhere. Research has shown that this force of impact can be multiplied 2 ½ times by the time it reaches the occupants neck. This can happen in ¼ of a second. (2)

When the force reaches the occupant, research has demonstrated that it causes a shearing motion in the middle part of the neck. This force can then produce damage to the disc, facet joints, ligaments and nerves.

As a chiropractic physician for over 30 years, I have seen patients in both of these scenario’s. We have patient’s who come in after an accident where there was significant damage to the car and they have suffered only minor injury. Then we have those who have just a small dent in the bumper and they are experiencing significant pain and disability.

If you have been involved in an auto collision and there is minor damage, don’t let someone try to tell you that you have not been hurt! Give us a call at (314) 731-4383 and schedule and exam today!