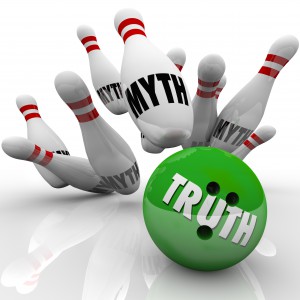 For those who have been injured in an auto accident, many come to find out quickly that the insurance company is not their friend. Throughout the claim process there are multiple myths that the claims adjuster will throw out there to diminish your injury.

Probably the three most common include:

Myth Number 1: Minimal or no damage to the car means there shouldn’t be any injuries!

This is probably the most common lie propagated to discredit the auto accident victim. Repeatedly, we hear the insurance adjustor commenting that there was minimal damage to the car, so there could not have been much of an injury. Sadly, they either do not know or choose to ignore the research.

Dr. Ian MacNab, a well known researcher, noted that you cannot use the severity of an impact to determine the degree of injury a victim suffers. (1) Further, there are industry standards that a bumper must be made to withstand impacts up to 7 mph. Thus the force of impact must be transferred some where, typically the victims neck.

There is also an argument to be made that the worse the damage to the car, the less likely the severity of injury: A case in point is NASCAR. Without going into all the physics involved, these cars are designed to “break away” with impact. Each piece of car that fly’s away carries with it potentially damaging forces or kinetic energy.

For the typical car on the road, the more the fender or bumper crumbles, it dissipates the potentially harmful forces and could aid in limiting the severity of injury. In my years of practice, I have personally seen this. Patients will come in for an exam and show me pictures of their totaled out car and yet we find their injuries are mild. And yet I see those with minimal damage and they are experiencing moderate injury. Why? It has to do with the physics.

For more information on how an impact with minimal damage may actually cause the injury, click here.

Myth Number 2: The injured person did not complain of pain at the scene, so they must not have been hurt!

It is not uncommon for a victim to initially tell police at the scene they are ok, only to develop pain the next day or during the following weeks. There are simple, common answers to why this may happen.

First, there is the adrenaline rush, or fight or flight effect, that happens with most people. When he victim experiences the fear of the collision, the body dumps adrenaline into their system. This may initially mask the injury until the adrenaline is reabsorbed. Then the pain kicks in.

Second, there is a very complex chemical reaction that happens with tissues like ligaments, muscles and nerves are injured. There is a process of cell break down, irritating chemicals are released and swelling builds up to the place that it now chemically irritates the nerves producing the pain. This chemical process can take 1-3 days to begin to build up and produce pain.

Myth Number 3: IT is only a strain or sprain and should heal in a few weeks!

While there may be a strain or sprain component to the injury, there are typically more structures damage. They include the highly sensitive facet joint, small joints in the back of the spine as well as the disc or nerves.

There have been many studies performed demonstrating the long term affect of the injury. On average it is shown that 43% of victims experienced long-term symptoms (2)

If you have been injured in an auto accident, you can expect one or more of these lies to be used against you to diminish the severity of your injury. Choosing the right doctor that can effectively document your injury and explain the fallacy of these lies is crucial to your recovery and claim.

Since 1984, we have been helping the injured. Not only are we known for helping our patients, but local attorneys love our detailed documentation of the injury. If you have been injured, call us today at (314) 731-4383 to schedule and appointment.